A Designated Marksman Rifle (DMR) in layperson’s terms is defined as a modified assault rifle designed to equip a squad-based Designated Marksman; a role somewhat in between a sniper and general infantry. A DMR is typically of the semiautomatic variety, and closely resembles the standard squad rifle, except for perhaps a more powerful optic.

The department I work for is one of the few departments in the country with a full-time SWAT team, and they are currently running a different platform for their designated sniper officers. Not being a SWAT guy, I’m one of about 130 patrol rifle guys for our department of 1300 sworn, so the AR platform is one I’m much more familiar with, rather than the Remington 700 platform. The FN America DMR II was right up my alley.

FN America, the stateside subsidiary of internationally-famed FN Herstal recently sent along their DMR II to check out. In keeping with the basic tenets of a DMR, the FN America DMR II is based off of the AR-15 platform. The DMR II is comprised of a forged upper and lower receiver set, a FN 1:7 18” Cold Hammer Forged chrome-lined barrel chambered in 5.56 NATO that is capped with a Surefire ProComp, and standard milspec controls. Without additional optics, the DMR II weighs in at just over 7lbs, which in conjunction with its overall length, makes for a manageable and maneuverable weapon platform.

Timney Triggers, as most readers know, have produced match grade replacement triggers since 1946. With a 100% lifetime warranty and decades of design and execution experience, Timney Triggers was an excellent upgrade choice.

The FN America “Wedgelock” is also a thoughtful upgrade. The Wedgelock rail system does not require any timing at all, and the rail itself is easily installed. Once the barrel has been mounted into the upper receiver and the titanium barrel nut is torqued down, all the end user has to do is slide the handguard on, align the 12 o’clock rails using the supplied anti-rotation pin, and tighten down the locking mechanism located at the 6 o’clock position. Two additional set screws are included to also tighten the rail down for enhanced piece of mind.

Upon taking possession of the DMR II, I inspected the rifle and contents of the box. Included in the packaging was the rifle itself, FN America documentation, Wedgelock installation instructions and tools, and a 30 round Magpul PMag.

I cracked open the rifle, and withdrew the milspec charging handle and bolt carrier group. Upon cursory inspection, the gas key screws seemed adequately staked, and the gas key itself was solidly tightened down. The castle nut similarly was also adequately staked (although not aggressively), and I could see no obviously out-of-spec issues with the rifle.

The DMR II did not come with any back-up iron sights, or (obviously) an optic, so I mounted my personal Steiner Optics T5Xi 3-15×50 onto the top and headed out to the range. 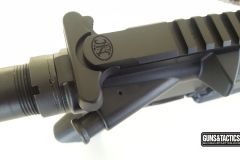 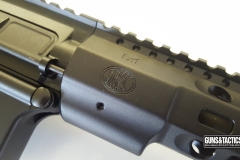 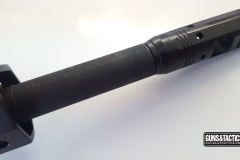 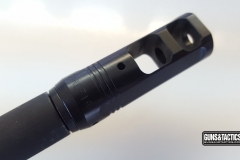 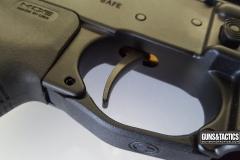 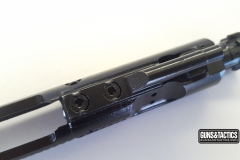 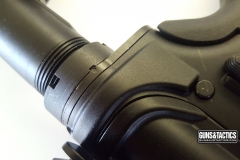 My time was extremely limited my first range outing, and all I had the opportunity to do was to get the rifle zeroed. At my department’s 100-yard range, I was quickly on paper, and achieved MOA results at 100 using economy once-fired rounds that I got on the cheap. Pretty much as I expected.

Unfortunately, that was all the time I had due to my work schedule, and I planned to hit the local mountain ranges with a couple buddies of mine to stretch out to 300-500 yards, as that would be an appropriate range for a DMR engagement.

Unfortunately, the mountains here in the PacNW were still snowbound. After a nice 2 hour drive but aborted trip, I returned to my department’s range and settled for the 200-yard range. Prior to this outing, I purchased a couple different ammo types to see what the DMR II liked. Obviously a 1:7 twist chambered in .5.56 NATO would prefer heavier loads, however I wanted to get an idea of how different bullet loads would print at 200 yards. In addition to the economy once-fired stuff I’d already shot, I brought along some Hornady Mfg. Match 55gr HP, Black Hills .223 68gr Heavy Match HP, and some Black Hills 5.56 77gr OTM.

I started off confirming zero with my once-fired brass, and at 200 yards, my initial prints were a little off to the right. A few guessed windage adjustments, and I began to walk my shots in to center. Shot #1 was about 4” low left. Shot #2 after an adjustment was about 3” low left. Shot #3 was 2” low, and Shot #4 was about 1” low. I figured my 5th shot would be on the money, so I settled in and pressed off the shot.

Bewildered, I pressed off another round. No impact again. A little more than confused, I shot another three rounds, and with no visible impacts I tabled the DMR II and traversed out to look at my target. Once closer, I could see a new group, approximately 7” low and 8” left of center. I could make no sense of what I was seeing, so after I raised my target back into position, I returned to my bench and had my buddy try shooting a 5-shot group.

To much consternation, he shot a 5-shot group in the same area – 7” low, and 8” left of center. I began to worry that something was wrong with my scope. Since I was out of time, I packed up after a very frustrating session and went to work. At this point, I had approximately 35 rounds through the DMR II.

Once back at the house, I inspected my Steiner T5Xi and could see nothing physically wrong with it. I’ve had that scope for well over a year, and nary an issue, so I was certainly concerned that it had gone belly up internally. I swapped the Steiner out for a Vortex 6-24, and headed back to the range a few days later.

Since I had a new scope mounted, I returned to the 100-yard range to obtain a zero. Back with my cheap once-fired .223 ammo, I got back to a 1 – 1.5” rough zero, which I was OK with, as I was under the gun, timewise, and I would settle down and take my time with the match ammo, which I didn’t want to waste.

Once my initial zero was established, I attempted to shoot a couple confirmation groups to settle in before I switched out to my match ammo. My second group was not a group at all, in fact I shot a 5-shot vertical string; 1.5” low of POA, and descending downward approximately 2”. My third group got worse; again 1st shot was 2” lower than POA, and descended downward 2.5”. The fourth group was the worst of all; 3.5” low of POA, and a 2.5” descending string.

Absolutely frustrated, I cleared the rifle, and physically inspected it. The only thing that I could think of at the time, was that perhaps the muzzle device was loose. Once the barrel cooled enough, I grabbed the Surefire ProComp to see if it was loose, and to my surprise, the entire barrel moved. Loose barrel, that would explain some of the crazy deviations I experienced.

After talking with a few of my friends and a reputable gunsmith, I began to suspect that that receiver face on the upper receiver itself wasn’t square. I removed the Wedgelock handguard, and could easily break the barrel nut loose simply using my modest grip strength. After cleaning the receiver threads up, I took a look at how the barrel seated in the receiver, and it was definitely out of spec. With the upper mounted to a vise, I could deviate the muzzle of the barrel laterally approximately .5” at maximum deviation, and approximately .25” vertically at maximum deviation.

Without having the time to send the rifle to my gunsmith and square up the receiver face, I was left with no other option but to simply torque the barrel back on as tightly as I could, and try to work through the review.

I tightened the barrel down to an upper limit of 80 ft./lbs., and headed back out to the range. I chose to keep it simple, rezero, and see what rounds the DMR II seemed to shoot consistently (albeit at 100 yards).

After rezero, I ran through the Hornady and Black Hills. Best group out of the day (absent the omnipresent flyer) was a barely sub-MOA group with the Black Hills 77gr 5.56 OTM, which, based on the weight of the cartridge, was really no surprise.

FN America is already known as a quality company, so I believe that the evaluation rifle I had was an anomaly. Many law enforcement agencies, including my own, have evaluated and adopted FN America’s FN Patrol Carbine to slowly replace our current Colt carbines as their service life nears their end.

Now, in talking with officers from different departments around the country, I received one range report from an East Coast agency where the FN Patrol Carbine failed their accuracy tests. My department has 80 FN carbines ready to deploy, and none of our testing thus far has resulted in any failures, so again, like any other big company out there, sometimes a lemon slips through the cracks…and apparently, I got that one lemon.

All of that being said, let’s take a look at the DMR II objectively in terms of cost, durability, and whether or not it meets criteria for a viable DMR. The factory specs from FN America are as follows:

Pair this rifle with quality glass, and the DMR II could be considered a viable option for a DMR for domestic law enforcement use. I would hope that FN America take a little time to ensure that their factory offerings meet muster prior to shipping, however I’m sure that if a lemon ended up in a consumer’s hands they would strive to make things right, as any reputable manufacturer would.

This site uses Akismet to reduce spam. Learn how your comment data is processed.