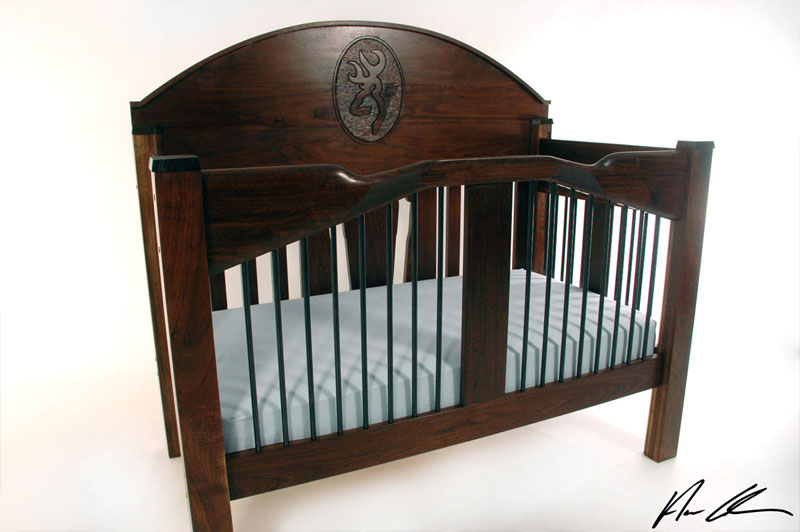 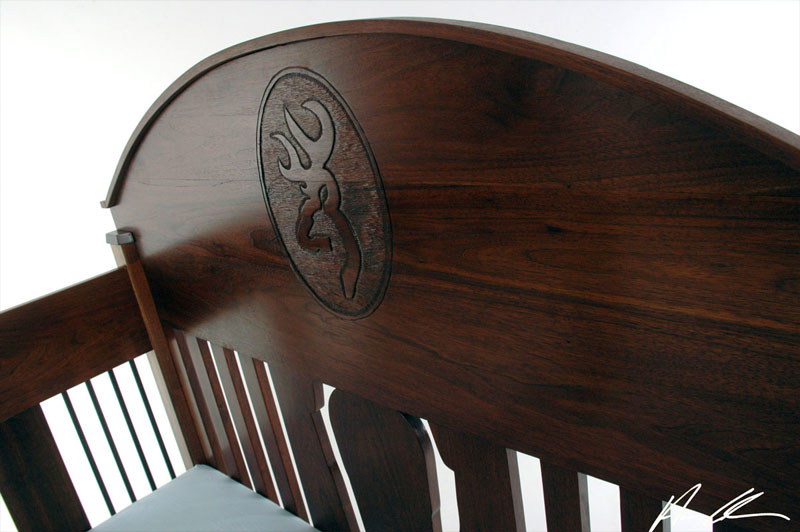 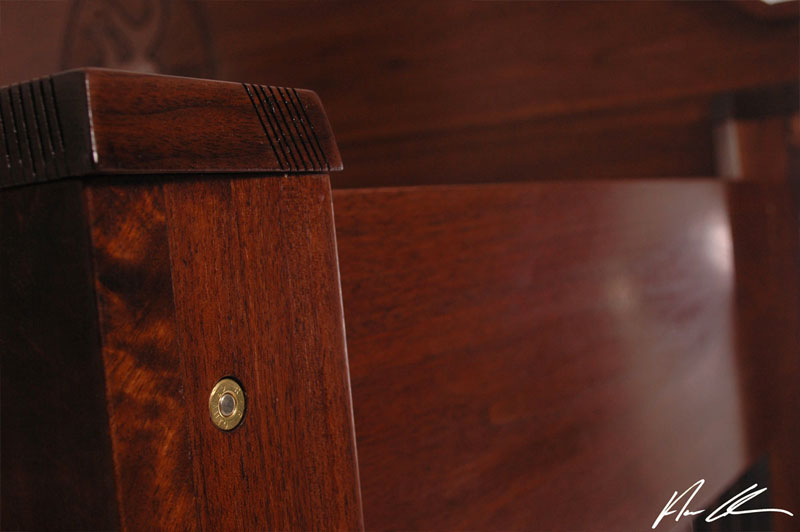 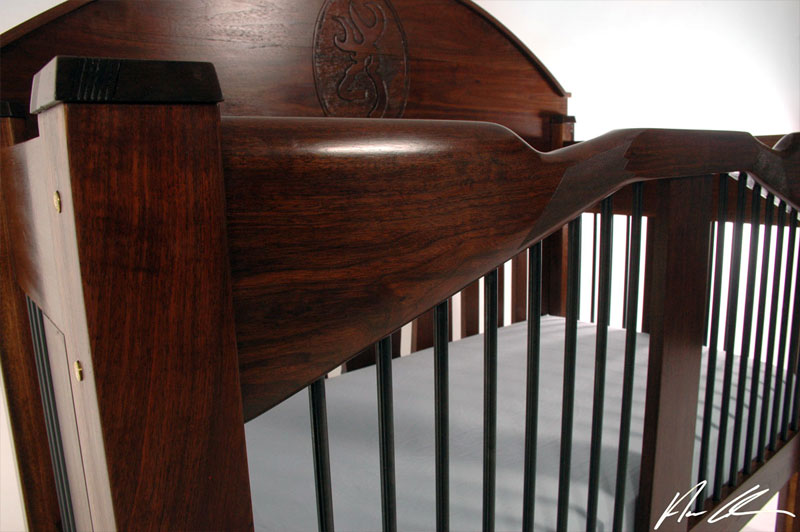 In the summer of 2010 my wife showed up at my office around lunchtime and quietly informed me that we were going to have our first child. As expected, this type of news is not conductive to productivity for the rest of the day. With a million thoughts rushing through my head, one in particular seemed to take hold quickly.

One of my good friends made his firstborn a baby bed a year or so earlier. So, in a classic case of male “one-ups-manship,” my kid needed a better one. It didn’t matter what gender we were going to be blessed with, their bed was going to be inspired by the works of the greatest gun designer of all time, John Moses Browning. Sure there are other gun designers out there who have made a huge mark on not just the firearms industry, but the world. But, as far as I’m concerned, none have done so as beautifully as John Browning.

Why go to all this trouble when a nice bed is only a mouse click away? The reason is two fold. First and foremost, to outdo my buddy. But, a close second is the fact that so many youth these days are indoctrinated with the idea that guns are bad. Guns are evil, and they’re only used to hurt people. I wanted my child to offer the contrasting truth as he grew up, that guns are beautiful, they aren’t evil, and the best time to start was right away.

I wanted my child to offer the contrasting truth as he grew up, that guns are beautiful, they aren’t evil, and the best time to start was right away.

It all started with a theme and a sketch. We wanted to include multiple elements of John Browning gun designs, and top it off with the Browning Buckmark. It was never meant to scream “GUNS,” but rather, it needed to be subtle design elements that hinted at specific models.

Now, there as one more obstacle to contend with. I’m not a woodworker…so there’s going to be a learning curve and a massive tool buy here.

After finding a load of rough walnut from a tree harvested in the 1950‘s on craigslist, having it surfaced by a local woodworker with a big ass belt sander, choosing the best boards, and addressing all the federal safety regulations, it was time to start.

The front rail features two stocks from the 1894 Winchester lever action meeting in the middle. Being the centerpiece of the bed, the best board was used for this element. After the glue set up, and the holes were drilled for the steel bars, I got out an old horse shoe file and went to work shaping it. Surprisingly it only took an hour or so to shape the curves…but the real work on the stock was just ahead.

Having never checkered anything in my life, this was a make or break moment. Sure I practiced a little, but that doesn’t change much. One major mistake here, and we’ve got to start over, and I loose the beautiful grain in my best board.

There are some master checkering artists out there. People that can do amazing things with these little tools. I’m not one of those people, but after several nights of slow monotonous motions in front of the television,and some cleanup with sandpaper, we had a front rail ready for assembly.

Next up it was time to tackle the headboard. This was a lesson in everything from pocket screws to jointing, carving, and bent lamination. The top portion of the headboard was pretty simple. Make space big enough to carve the logo. But on the bottom we included cutouts that carried the shape of the famed Auto 5 shotgun.

My grandpa loved his 20 gauge Browning Auto 5. That’s really the only gun he ever talked about, and it found its way into many a story from the good ol’ days. By this time we’d found out we were having a boy, and this gun had to be part of Hank’s bed.

This element had a little twist. According to federal safety regulations, there is a limit to how wide an opening can be in between the upright stiles. So, by eliminating the trigger area and compressing it slightly, we were able to keep it under that mark.

After tracing the Buckmark logo on the headboard, it was time to bring out the little carving gouges. It took a few nights and lots of vacuuming, but we got it done.

By now the bed wasn’t done, but my wife was. She was a week past due, and we were headed off to the hospital. After twenty something hours in labor, the docs went in after our little boy with the knife, and four days later, we were back home. For the next month or two he needed to sleep nearby anyway, so I still had some time before my lady really started to get on to me.

If you’ve ever priced custom made furniture and thought “Holy crap! That price is outrageous!” Let me assure you, its probably not. We’ve just gotten so used to our super cheap Walmart / Target / Ikea / Made in China / junk furniture that we no longer understand the time and skill it takes to make a quality solid wood anything. The time involved is extensive, and the skill level attained by some of the masters is dying with them because few craftsmen are stepping up to the plate. But, back to the bed.

Each leg needed a cap on top so the end grain of the board wasn’t showing. And what better to cap them off than the slide of a 1911. Once again, this element was just meant to be a hint, not a scream. It took a while of trial and error to develop a jig that could accurately cut those slots at the correct compound angle on the bandsaw. As simple as it may seem, this small piece could be the one that stumped me the longest.

After a long six month wait, my steel bar stiles were finished at the gunsmith’s shop. I’d had him re-finish an old Ithaca 37 several years back, and he did a flawless job. What better to line the outside of a Browning themed bed than steel bar stock that has a rich classic black finish on it?

Those steel bars were the final piece to the puzzle. After some oil based finish and polyurethane, a years worth of planning, design, trial, error, construction, a barn full of used power tools, cold late nights, frustration and accomplishment was finished.

To cap off the bolts that hold the bed together, we used another John Browning creation: the .45acp. This was just an empty case with a dead primer, but it carried the theme well.

After the final assembly we entered the bed into the Show Us Your Buckmark competition Browning has each year. The folks at Browning liked it enough to send my son a shotgun to add to the CZ I bought him while my wife was in labor. Did you know hospitals had gun stores? They do thanks to gunbroker.com.

No, we don’t want him to grow up fast, but I gotta tell you, I can’t wait to teach him how to shoot as soon as he can hold any firearm up. And even though its a long ways down the road, I hope his kids like this bed as much as he does. My only regret is I didn’t find a place for Ma Deuce.